Last easter holiday, I traveled to Firenze, Pisa, Napoli, and Roma. I know it's been almost 1.5 months after I traveled, but I just had no time to share stories related to my holiday.

Now, I start with Firenze.

Florence (in Italian is Firenze) is a beautiful city. It was the second capital city of Italy, before Rome. Florence has many artisctic and architectural heritages, such as the Basilica di Santa Maria del Fiore or Basilica of Saint Mary of the Flower, Ponte Vecchio or the old bridge, and Accademia-where the famous The David's statue is located.

Everyone who comes to Florence never left the chance to take a picture with this symbolic place, Ponte Vecchio. For me, it's an uncommon where on the bridge, there are buildings/shops. It was built in Roman times. The tenants were butchers.

It is said that the economic concept of bankruptcy originated here: when a merchant could not pay his debts, the table on which he sold his wares (the "banco") was physically broken ("rotto") by soldiers, and this practice was called "bancorotto" (broken table; possibly it can come from "banca rotta" which means "broken bank"). Not having a table anymore, the merchant was not able to sell anything. (source: wikipedia)

Now, the tenants are jewelry and souvenirs shops. The length of Ponte Vecchio is about 100 meters. So you can just stay in the middle of the bridge, just to see the view from it. 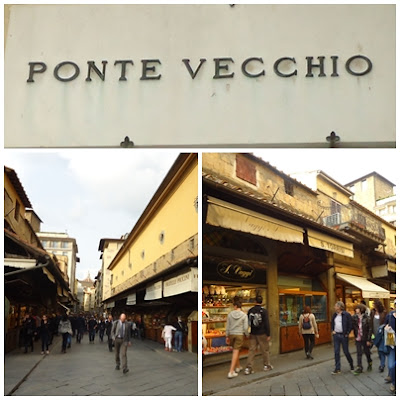 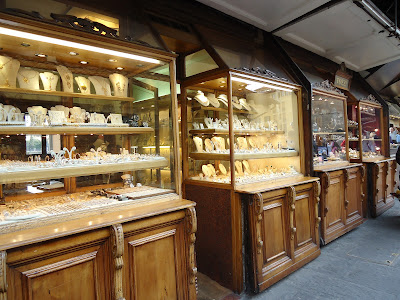 Some of the displayed jewelry

There is a statue on the bridge, it is Benvenuto Cellini. He was an Italian goldsmith, sculptor, and painter. One of his famous artwork is Perseus with the head of Medusa sculpture. It is placed in the Loggia dei Lanzi gallery, on the edge of Piazza della Signoria in Florence. 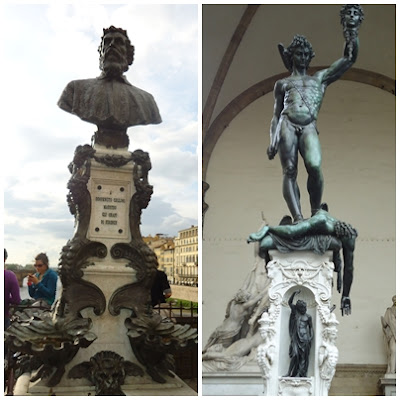 Left-right: Benvenuto Cellini statue-Perseus with the head of Medusa